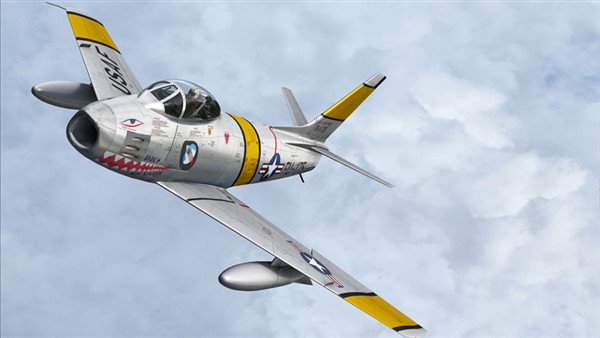 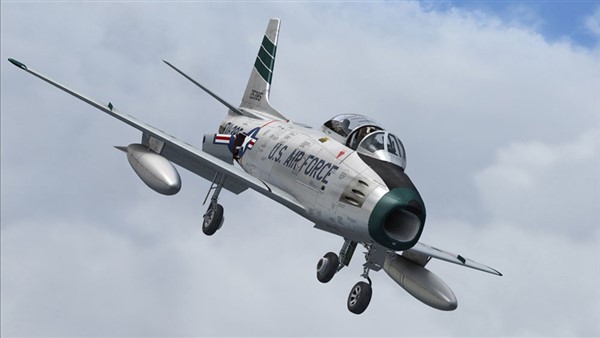 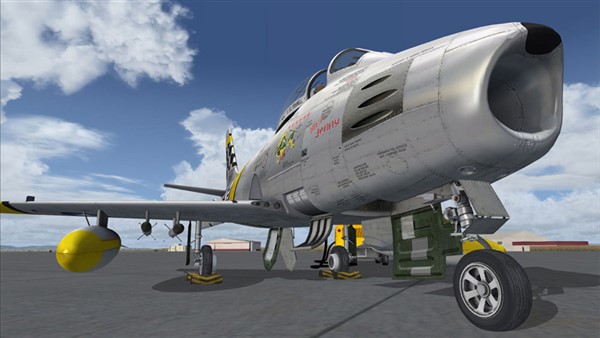 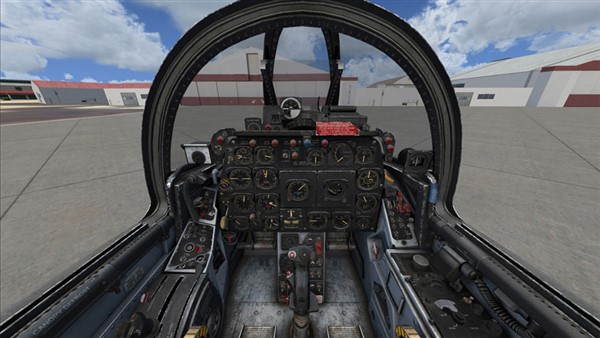 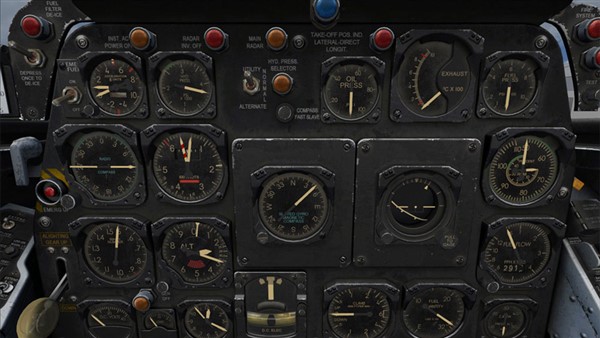 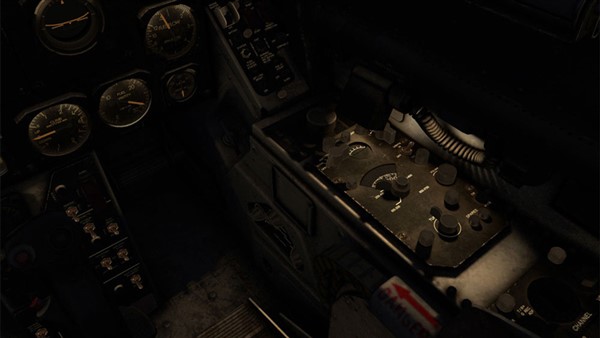 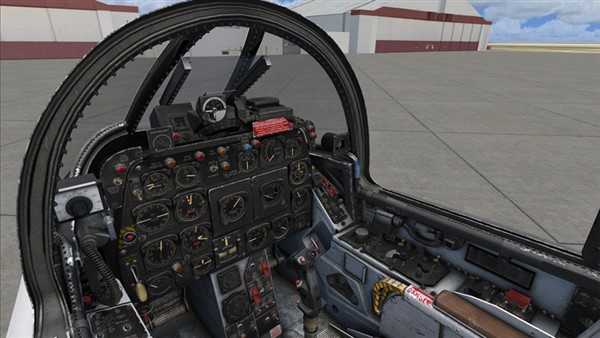 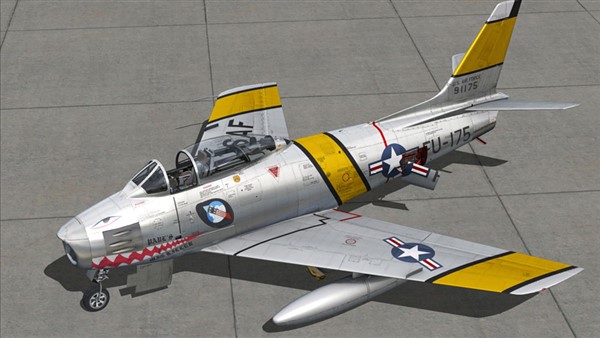 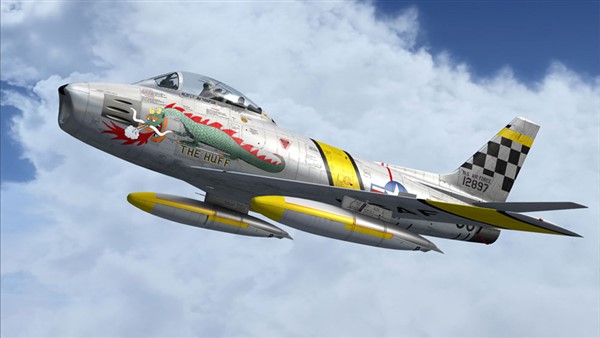 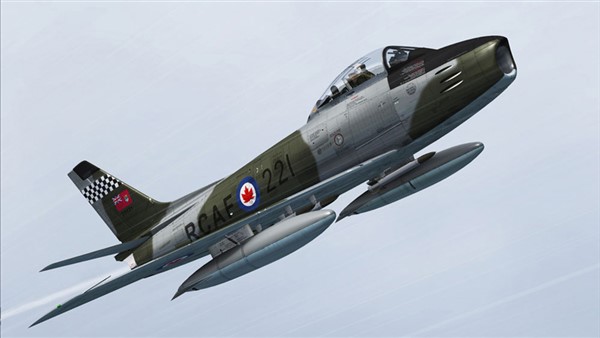 A highly detailed replica of its real-life counterpart, with realistic systems and avionics, and an exterior load manager.

Produced by North American Aviation, the Sabre is best known as the United States\' first swept wing fighter which could counter the similarly-winged Soviet MiG-15 in high-speed dogfights over the skies of the Korean War (1950-53).

Considered one of the best and most important fighter aircraft in that war, the F-86 is also rated highly in comparison with fighters of other eras. Although it was developed in the late 1940s and was outdated by the end of the \'50s, the Sabre proved versatile and adaptable, and continued as a front-line fighter in numerous air forces until the last active operational examples were retired by the Bolivian Air Force in 1994.

Its success led to an extended production run of more than 7,800 aircraft between 1949 and 1956, in the United States, Japan and Italy. Variants were built in Canada and Australia. The Canadair Sabre added another 1,815 airframes, and the significantly redesigned CAC Sabre (sometimes known as the Avon Sabre or CAC CA-27), had a production run of 112. It was by far the most-produced Western jet fighter, with total production of all variants at 9,860 units.

We are extremely pleased to introduce to you our rendition of the renowned F-86 Sabre!

As most F-86 enthusiasts will already know, there were many variations of this aircraft over the course of it\'s service career. In response to the challenges posed by the formidable MiG-15 during the Korean War, a constant stream of improvements were designed and implemented in an effort to achieve superiority.

We\'ve decided give our full focus, talents, and effort to a single variation: the F-86F-30.

The F-86F itself was deemed the \'ultimate MiG killer\' and was produced in large numbers, with some 2,540 airframes manufactured. The F-30 represented efforts to counter the high altitude turning radius of the Mig-15, with the famous \'6-3\' wing being introduced. A significant refinement, this modification deleted the leading edge slats and added a new solid leading edge with six inches more chord at the root near the fuselage and three inches more length at the wing tip. five inch high boundary layer ""fence"" rounded out the changes.

With a maximum operating ceiling of 52,000 feet, a top speed of 695 miles per hour, and the ability to finally out-maneuver it\'s primary foe, the F-86F-30 became the supreme day fighter of the world.

Great care and attention has been given to all areas of this model. We\'ve focused heavily on providing authentic flight dynamics that closely mimic the real aircraft, drawing on a wealth of pilot reports and available documentation. As well, we\'ve also strived to closely match the systems of the F-86F30, and matched that with an extremely detailed model and exquisite high definition texturing.

While we\'ve created an aircraft in which you can still \'jump in and fly\', those willing to take the time to thoroughly study the provided manual will find a lot to benefit from, along with satisfaction of fully mastering one of the early complex fighter jets!
Highly Configurable

Our F-86F features a custom Aircraft Configuration Menu. Quite in-depth, this can be used to set detailed payload options, radio configurations and ground equipment visibility. Pilots will have to be mindful of how the aircraft is loaded, as adding or removing ordinance or fuel will have an effect on flight dynamics and handling characteristics!

The MilViz F-86 now supports a wide range of platforms, in a single downloadable installer:

We are pleased to offer a separate edition of the F-86F-30 without TacPack integration.

With this edition, as well as an installation of the renowned TacPack software from Vertical Reality Simulations, the armament of the F-86F-30 becomes quite powerful. Experience the weapons of the F-86, from it\'s guns to HVAR rockets and MK117 bombs. The TacPack edition achieves close to full systems fidelity, with the exception of the automatic release mode for the bombs.

Vertical Reality Simulations\' TacPack software offers stand-alone weapons and warfare platforms for both Flight Simulator X and Prepar3d. They are payware products and are not included with your purchase from MilViz. An appropriate, platform specific version of the TacPack software is required for the above described functionality and integration in the F-86F-30.
New! MVAMS Integration

As of June 2017, our innovative MilViz Aircraft Management System (MVAMS) is now included with the F-86 package.

Our MVAMS utility runs outside the simulator in order to provide not only a unified location for adjusting configuration settings, but it also provides the means to incrementally update individual products to quickly address issues and make fixes when required, without having to have our customers download and reinstall new versions of the aircraft. This allows our customers to quickly discover and install any pending updates for their aircraft, ensuring that they are completely up-to-date with our latest fixes, changes, or technology.

As of June 2017, the MilViz F-86 has been updated for full compatibility in the new Prepar3d version 4!